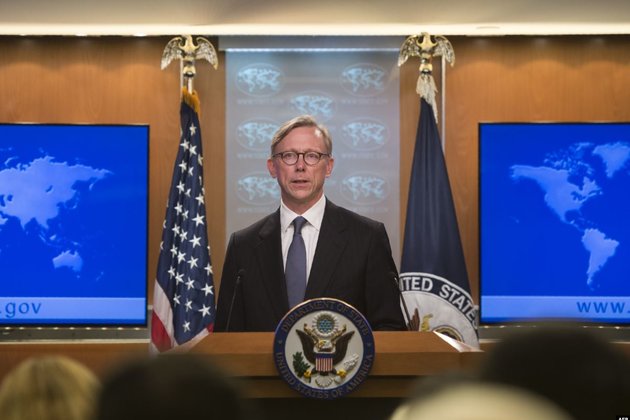 WASHINGTON -- Brian Hook, the U.S. special representative for Iran, will travel to the Persian Gulf region to hold meetings with key allies after telling a House of Representatives panel that "our pressure campaign" against Tehran is working.

The State Department said Hook would leave for the Middle East on June 20 and hold meetings in Saudi Arabia, the United Arab Emirates, Kuwait, Oman, and Bahrain.

The envoy "will discuss Iran's regional aggression, including its recent attacks on two oil tankers in the Gulf of Oman," the statement said.

"He will also share additional U.S. intelligence on the range of active threats Iran currently poses to the region."

Relations between Washington and Tehran have plummeted since the United States in May 2018 pulled out of the nuclear deal and later reimposed sanctions on Iran that had been lifted in exchange for the country agreeing to curb parts of its nuclear program.

Recent attacks on oil tankers in the Gulf of Oman and near the Strait of Hormuz have exacerbated the situation, with Washington blaming Iran for the incidents. Tehran denies any involvement.

The heightened tensions have raised fears of an armed conflict in the region, although both Washington and Tehran have said they are not interested in starting a war.

Hook earlier on June 18 told the House Foreign Affairs Committee that U.S. policy is aimed at bringing Tehran to the negotiating table and not starting a new Middle East conflict.

'No one should be uncertain about our desire for peace or our readiness to normalize relations should we reach a comprehensive deal,' Hook told the panel.

'We have put the possibility of a much brighter future on the table for the Iranian people,' he added. "Our pressure campaign is working.'

While beefing up U.S. military strength in the Persian Gulf region and slapping new sanctions on Tehran, President Donald Trump has also held out the possibility of new talks with Iran to resolve matters dividing them.

Trump has taken a hard line on Iran since taking office in 2017. In May 2018, he pulled out of the landmark 2015 nuclear deal that Tehran signed with six world powers and began reimposing sanctions that had been eased in return for curbs on Iran's nuclear programs.

Democratic Congressman Ted Deutch, the House committee chairman, questioned the administration policy, saying, 'Rather than force Iran back to the negotiating table, the administration's policy is increasing the chances of miscalculation, which then would bring the United States and Iran closer to a military conflict.'

Hook said that 'our policy is at its core an economic and diplomatic one. Recently, however, Iran has responded to it with violence. Iran should meet diplomacy with diplomacy, not with terror, bloodshed, and extortion.'

The State Department statement said that following his journey to the Middle East, Hook will travel to Europe for consultations with the so-called E3 - Britain, France, and Germany -- on June 27 in Paris.

The E3 countries also signed the 2015 nuclear pact with Iran -- along with Russia and China -- and had urged Washington to remain a part of the deal. They have often opposed Trump's hard line against Tehran, although they, too, have warned Iran about moves to destabilize the region.

With reporting by AP and AFP