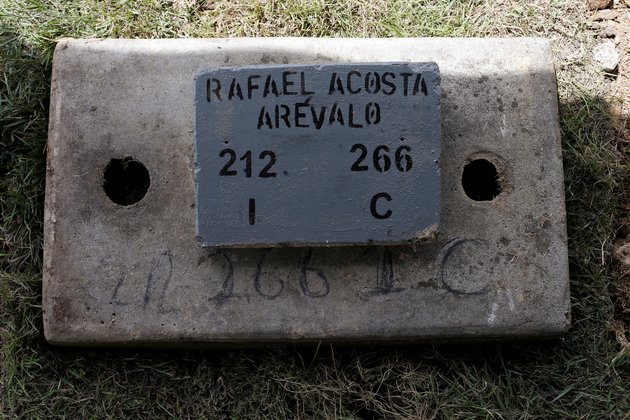 The United States Department of Treasury announced sanctions against Venezuela's counterintelligence agency Thursday, in reaction to the death of a Venezuelan captain in the organization's custody.

Venezuela accused Captain Rafael Acosta Arevalo of involvement in an alleged assassination plot in June. A week after being detained, Acosta was seen in a wheelchair at a public military tribunal, unable to speak and showing "clear signs of torture," according to a United Nations statement. Acosta died the next morning.

Venezuelan Chief Prosecutor Tarek Saab charged two intelligence agency officials for homicide in connection to the navy captain's death but did not specify what had caused it. The charges don't include torture.

The measures will apply to Venezuela's General Directorate of Military Counterintelligence and all its assets in the U.S., whether owned directly or indirectly. The impact may be symbolic, as it's unlikely the U.S. currently takes part in many transactions with the agency. However, sanctions also block any American or person on U.S. soil from dealing with the agency.

Venezuelan authorities buried Acosta's remains Wednesday over protests from his family, which had wanted an independent autopsy, according to U.S. News & World Report.

"I am shocked by the alleged torture of Captain Acosta Arevalo, and that his treatment in custody may have been the cause of his death," she said, later pressing Venezuela to fairly treat the other six people detained with Acosta.

A U.N. report released July 4 said that the intelligence agency allegedly involved in Acosta's death was carrying out "arbitrary detentions, ill-treatment and torture of political opponents and their relatives." It described torture through electric shock, suffocation, water-boarding, deprivation of food and water, and more.

The U.S. has also sanctioned President Nicolas Maduro's own son, four loyal governors, a state-run mining company, the oil company, the central bank, and a number of other financial institutions, all part of a concerted effort to force Maduro to step down.

A Russian bank and two companies that delivered Venezuelan oil to Cuba have also had sanctions slapped on them for trying to help Venezuela circumvent sanctions.

Opposition leader Juan Guaido declared himself president under the Venezuelan constitution in January. Though Guaido has the support of 54 countries, including the U.S., Maduro retains critical support from the military, China and Russia.

Antonio Marcos Diniz was only 13 years old when his family was forced to leave their home near Brazil's Atlantic ...

United States in bid to beef up relationships in Western Hemisphere

This year is on track to be one of the three hottest on record, completing a run of six years ...

A celebration of 2020? Many might think we should just hold our breath and say good riddance to what has ...

United States in bid to beef up relationships in Western Hemisphere

A celebration of 2020? Many might think we should just hold our breath and say good riddance to what has ...

Investigation in U.S. mounted into bribery for pardons claims

The U.S. Department of Justice is investigating a potential crime involving bribery and presidential pardons, according to court documents unsealed ...