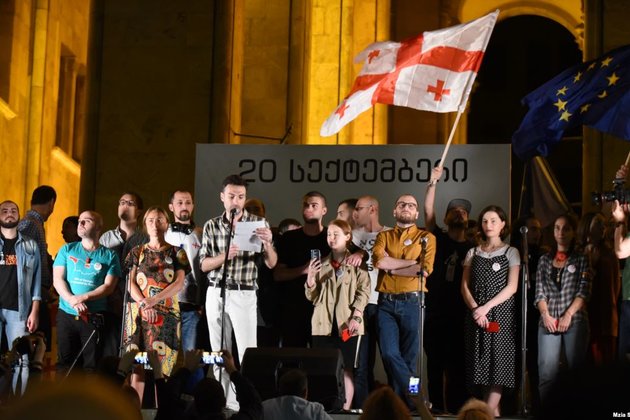 TBILISI -- Thousands of people have gathered in the center of Georgia's capital to protest against the government and the ruling Georgian Dream party, three months after the violent dispersal of a rally against Russian influence.

The protesters blocked traffic on September 20 in Rustaveli Avenue, the city's main thoroughfare, holding placards with slogans against Georgian Dream leader Bidzina Ivanishvili, a billionaire businessman and former prime minister whom critics accuse of ruling the country from behind the scenes.

"The unilateral, oligarchic, informal rule of Bidzina Ivanishvili is unacceptable to us," Shota Digmelashvili, one of the organizers of the Shame civic rights movement, told the crowd as he presented an action plan for the 2020 parliamentary elections.

The Shame movement that has been holding daily protests outside parliament in Tbilisi for the past few months.

The wave of protests was sparked by the visit of an official Russian delegation to parliament in June, including a Russian lawmaker who sat in the Georgian parliament speaker's seat while addressing a group of officials from predominantly Orthodox Christian countries.

Three months ago, on June 20, more than 240 people were injured when police fired rubber bullets and water cannons to turn back crowds trying to enter the parliament building.

The opposition, anti-government activists, and their supporters were angered further this month when controversial Interior Minister Giorgi Gakharia was picked as the new prime minister.

The anti-government protesters had been calling for Gakharia's ouster from the Interior Ministry for his role in the police crackdown.

With reporting by Reuters