Biden, for First Time, Calls for Trump to be Impeached 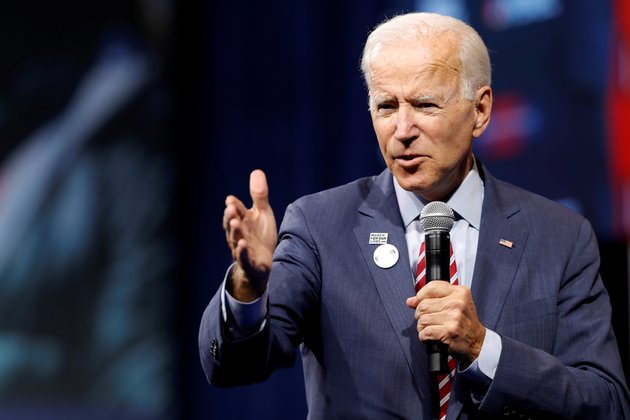 Democratic Presidential candidate Joe Biden has for the first time called for President Donald Trump to be impeached.

Trump responded on Twitter. "So pathetic to see Sleepy Joe Biden, who with his son, Hunter, and to the detriment of the American Taxpayer, has ripped off at least two countries for millions of dollars, calling for my impeachment - and I did nothing wrong. Joe's Failing Campaign gave him no other choice!," he said, without elaborating on the allegations of ripping off two countries for millions of dollars.

The White House has said it will not participate in what it calls the "unconstitutional" impeachment inquiry into Trump.

White House lawyer Pat Cipollone sent an eight-page letter to House Democratic leaders, including Speaker Nancy Pelosi, who are looking into whether Trump broke the law by urging Ukraine to investigate Biden.

Cipollone accuses the Democrats of violating "fundamental fairness and constitutionally mandated due process."

He says they are denying Trump the opportunity to question witnesses and see the evidence they are using to decide whether he should be impeached.

"All of this violates the Constitution, the rule of law, and every past precedent," Cipollone wrote, adding that inquiry is baseless, partisan, and an attempt to toss out the results of the 2016 presidential election.

If a majority in the House of Representatives were to approve articles of impeachment against Trump, there would then be a trial in the Republican-controlled Senate where the president's legal team would have the chance to present a defense.

Pelosi responded to the White House late Tuesday, calling the letter "manifestly wrong ... the latest attempt to cover up his (Trump's) betrayal of our democracy and to insist that the president is above the law."

Pelosi warned that any more efforts to "hide the truth of the president's abuse of power" will be seen as more evidence of obstruction.

Trump again denounced the impeachment inquiry, tweeting early Tuesday it is "A Total Scam by the Do Nothing Democrats" and that the whistleblower has "been so incorrect about my 'no pressure' conversation" with Ukrainian President Volodymyr Zelensky.

A whistleblower complaint about a July 25 call between Trump and Ukrainian President Volodymyr Zelenskiy helped trigger a House of Representatives impeachment investigation of Trump last month.

The White House has demanded Pelosi bring the impeachment inquiry to a full vote before the entire House of Representatives if the committees want any cooperation from Trump officials.

But there is no rule preventing the House from looking into allegations of illegal activity of a president before deciding whether to bring actual articles of impeachment to a vote.

The White House letter comes after another move by the Trump administration that Democratic leaders call obstruction.

Sondland had flown from Europe and was willing to appear. But his attorney, Robert Luskin, said Sondland "is a sitting ambassador and employee of State and is required to follow their direction."

Luskin said Sondland was "profoundly disappointed" at not being given the chance to talk.

The Democratic chairs of the House Intelligence, Foreign Affairs and Oversight Committees have now subpoenaed Sondland to testify.

Trump tweeted that Sondland would have appeared before a "totally compromised kangaroo court where Republican rights have been taken away, and true facts are not allowed out for the public to see."

Sondland, a Trump donor, was one of several diplomats who advised the Ukrainian leadership about how to carry out Trump's demands after his July phone call with Ukraine's Zelenskiy. During that call, Trump urged Zelenskiy to investigate Biden for alleged corruption tied to his son Hunter Biden's job with a Ukrainian gas company

According to a U.S. intelligence whistleblower, Sondland and other diplomats exchanged a series of text messages in which the diplomats wondered why roughly $400 million in badly needed aid to Ukraine was frozen.

Reports say there was a five-hour-long gap between text messages, during which Sondland telephoned Trump.

The next message assured one diplomat there was no "quid pro quo" of any kind with Ukraine, followed by Sondland writing, "I suggest we stop the back and forth by text."

Democrats want to know what happened in those five hours and why the text messages came to a sudden halt.

BRUSSELS, Belgium - NATO was holding an emergency meeting of the North Atlantic Council on Friday following the death of ...

PERTH, Western Australia - The biggest explosion in the universe after the Big Bang has been discovered by scientists studying ...

59% of Venezuelan housholds not in position to buy enough food

CARACAS, Venezuela - Hyperinflation in Venezuela means that roughly one-third ofthe population more than nine million people do not get ...

Could coronavirus really trigger a recession?

Fears are growing that the new coronavirus will infect the U.S. economy.A major U.S. stock market index posted its biggest ...

MOUNTAIN VIEW, California - Google on Wednesday announced it will invest more than $10 billion in offices and data centers ...

Walt Disney's world to be headed by Chapek