US Military Crosses Into Iraq From Syria 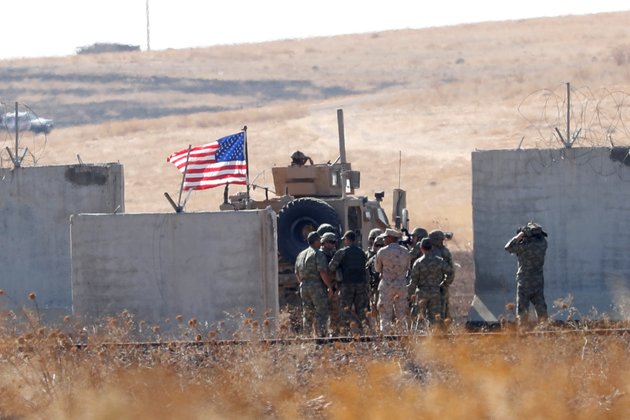 The news agency said the troops traveled over the Sahela border to Iraq's northern province of Dohuk.

A Reuters cameraman and an Iraqi Kurdish security source told Reuters that they had seen a convoy of U.S. military vehicles crossing the border into the semi-autonomous Kurdistan Region of Iraq.

A security source in Mosul also told Reuters that the U.S. troops had crossed into Iraq from Sahela.

U.S. troops withdrew from their largest base in northern Syria Sunday, with defense chief Mark Esper saying all American forces leaving Syria would be deployed to western Iraq to carry out anti-terrorist operations against Islamic State.

Esper said more than 700 U.S. troops would be moved to Iraq and not come "home" as U.S. President Donald Trump had tweeted they would.

Esper did not rule out possible U.S. counterterrorism raids from Iraq into Syria. But he said plans would be developed over time and include discussions with NATO allies in the coming days. He said if U.S. forces return to Syria they would be protected by American aircraft.

The U.S. currently has about 5,000 troops in Iraq under an agreement between Baghdad and Washington. The U.S. had pulled out in 2011 when combat operations ended there, but went back in three years later when Islamic State took over large parts of the country before later losing what it had gained.

Turkey said one of its soldiers was killed and another wounded Sunday after an attack by the Syrian Kurdish YPG militia in northeast Syria's Tel Abyad.

Trump generally reiterated Esper's assessment of what is happening in northern Syria in a Sunday tweet while adding a puzzling remark that Esper did not say, "We have secured the Oil." It was not immediately clear what oil Trump was talking about.

Meanwhile, a representative of the main Kurdish group in Syria, the Syrian Democratic Forces (SDF), is in Washington for talks with U.S. officials. There is no information so far about with whom the SDF's Ilham Ahmed plans to meet.

Turkish President Recep Tayyip Erdogan had agreed in talks with U.S. Vice President Mike Pence for the five-day pause in the attack to give the Kurdish fighters time to withdraw from the 32-kilometer "safe zone" Ankara is hoping to establish in northeast Syria near its border.

The SDF says it had evacuated its fighters from the northern town of Ras al-Ayn Sunday. Turkey said that it was closely monitoring the 86-vehicle pullback toward the town of Tal Tamr and wants Kurdish fighters to move further away from its border with Syria.

Turkey regards the Kurdish fighters as a terrorist group allied with Kurdish separatists that have fought for autonomy in southeast Turkey for three decades. But the Kurdish fighters fought alongside U.S. troops against Islamic State terrorists. Trump last week said the Turkish invasion of northern Syria was "not our problem" and that the Kurds were "no angels."

Secretary of State Mike Pompeo, who accompanied Pence, told the ABC News "This Week" broadcast there has been "relatively little fighting" since the cease-fire was agreed to.

He said the deal "will save lives," but that the U.S. needs to "make sure the commitments" by Turkey for the cease-fire "are carried out."

Pompeo said, "This administration's effort to flush ISIS will continue."