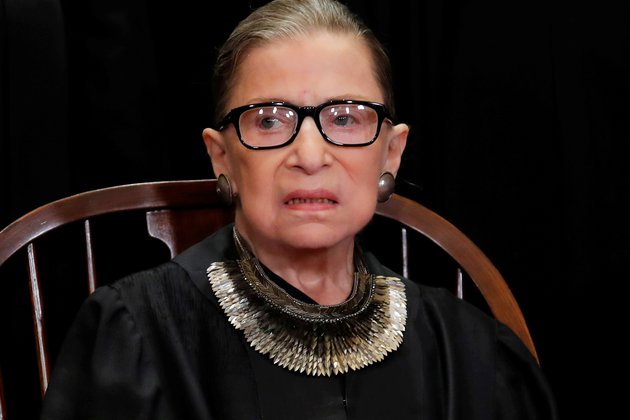 WASHINGTON - At 87, Ruth Bader Ginsburg is the oldest justice of the U.S. Supreme Court. Appointed by former Democratic President Bill Clinton in 1993, she's also one of its longest-serving and most liberal members with an almost cult-like following among progressives.

Last Friday, the "liberal lion," a survivor of several bouts with cancer, sent shockwaves through her legion of fans with the announcement that her cancer has returned.

While Ginsburg, affectionately known as RBG, said she has no plans to retire, progressives fear a possible court vacancy would allow President Donald Trump to put another conservative on the bench, further moving it to the right.

"Everybody is checking their phones daily to see what Justice Ginsburg['s] health situation is," said Russell Wheeler, a visiting fellow at the Brooking Institution, a Washington think tank, and a former deputy director of the Federal Judicial Center, the research arm of the U.S. judiciary.

With five conservative and four liberal members, the Supreme Court touches nearly every facet of American life. Two of its conservative justices - Neil Gorsuch and Brett Kavanaugh - were appointed by Trump. And despite ruling against several Trump administration policies, the court's ideological center of gravity remains conservative.

With at least one and possibly more court vacancies looming, liberals who worry about access to abortion, government health care programs, access to voting and other cutting issues are aggressively attempting to make the November election a referendum on the Supreme Court's future.

While some progressives are advocating expanding the court to loosen conservatives' grip - a far-fetched idea in a highly polarized environment - others say the first order of business is defeating Trump in the November election to halt his appointment of conservative judges.

Declaring that "the Supreme Court's future is now on the line," a coalition of progressive groups launched a new Supreme Court advocacy project this month. Called "Supreme Court Voter," the project is buying $2 million worth of ads in Arizona, Michigan, North Carolina, Pennsylvania, and Wisconsin - battleground states that could determine the outcome of the presidential contest.

"Donald Trump has hijacked our Supreme Court with far-right justices like Brett Kavanaugh who will serve for decades after Trump leaves office," the project's first ad says.

"The president's record appeals to conservatives who supported him in 2016, appointing judges that will faithfully uphold the Constitution - the very foundation of our nation," Parella said. "Contrast that with what we know about Joe Biden, who has proven he will bend to the will of the extreme left. On the question of judicial appointments, President Trump wins hands down."

Ginsburg is not the only aging Supreme Court justice likely to step down in coming years. Liberal associate justice Stephen Breyer, another Clinton appointee, is 81. Whoever is sworn in as president in January could have the opportunity to replace both jurists.

Alternatively, if the 77-year-old Biden were to win, the new Democratic president not only could replace Ginsburg and Bryer but potentially could dramatically reshape the court with a more liberal bent. Republican-appointed conservative justices Clarence Thomas, 72, and Samuel A. Alito Jr., 70, potentially are nearing retirement.

Historically, concern over the court's composition has driven more Republicans than Democrats to the polls. In 2016, Trump sought to capitalize on that, vowing to name conservatives to the high court and releasing a list of potential nominees.

The strategy paid off, with Trump attracting voters who by double digits deemed the Supreme Court an important factor in their decision.

While conceding the Nov. 3 election will likely turn on Trump's handling of the coronavirus pandemic and the battered U.S. economy, progressive activists say voters have "woken up" to importance of the Supreme Court.

"I'm seeing more passion about the court," said Aaron Belkin, director of "Take Back the Court," a progressive group that advocates court expansion, and a professor of political science at San Francisco State University.

There is some evidence that the heightened importance of the court is sinking in with voters.

In April, a poll by Suffolk University and USA Today found that more Democrats than Republicans view the Supreme Court as a top issue. Among progressive voters, the enthusiasm runs much higher, according to a recent survey by Hart Research Associates. More than 80 percent of respondents said that it is a "big concern" if Trump gets to appoint two additional Supreme Court justices, leading to a conservative supermajority.

Yet Biden hasn't campaigned much on the importance of the Supreme Court. Other than pledging to nominate a Black woman to the high court and saying he's compiling a list of potential nominees, he has stopped short of making the court a campaign issue.

The Biden campaign did not respond to multiple requests for comment.

"His promise to nominate a Black woman shows that he sees an opportunity to mobilize voters around the Court, and his recent promise to release a shortlist of candidates would be entirely new for a Democratic candidate," Fallon said.

Mark Rozell, dean of the Schar School of Policy and Government at George Mason University, said Biden doesn't have to talk much about the court in order to win over progressive voters.

"The activists on the Democratic left who are motivated on the basis of judicial appointments are going to be motivated by the fact that another four years of Donald Trump appointing judges to the federal courts from their perspective is going to be a disaster," Rozell said.