Invisible lives: where are all the older women in film and TV? 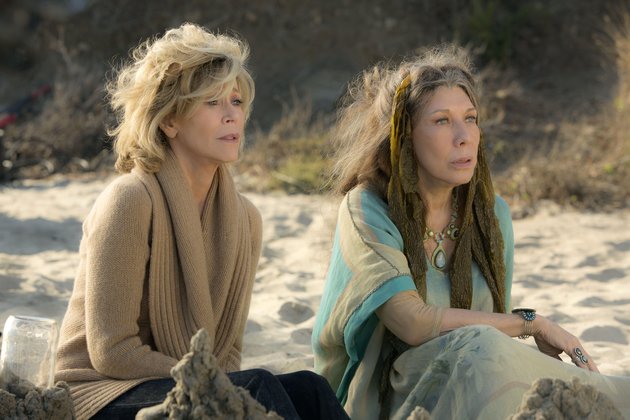 As a female actor in my mid 50s I've never felt more invisible, neither have I felt angrier. There are few parts out there for women my age and as much as there are some decent roles for the big guns - think Frances McDormand in Nomadland, Catherine O'Hara in Schitt's Creek or Jane Fonda in Grace and Frankie - there simply aren't enough to go around. It's thoroughly depressing and it feels like it's getting worse.

Research from 2019 found that older women are often relegated to supporting roles in films - or are consistently portrayed as grumpy, frumpy or senile.

The study analysed representations of older adults, in the top-grossing films of 2019 in Germany, France, the UK and the US - with a specific focus on women aged 50 and over. The study found there weren't any women over 50 cast in leading roles in 2019's top films, while two men over 50 were featured as leads. And when older women did appear, they were cast stereotypically.

Another study from 2018 found that only 35% of the top-grossing films from that year featured 10 or more female speaking characters. Compare this to the 82% that had 10 or more male characters in speaking roles.

Similarly, an analysis of over 10,000 films made in the UK between 1911 and 2017 found the gender mix in UK film casts has not improved since the end of the second world war. Female actors have also tended to make fewer films and have had shorter careers than male actors.

The analysis also found that unnamed characters who work in high-skilled occupations, such as a doctor, are also much more likely to be portrayed by men.

Caroline Noakes MP, the chair of the women and inequalities committee, has highlighted this issue on Twitter saying she has written to Ofcom to ask for a meeting about the under representation of women aged over 45 by UK broadcasters.

What's perhaps most disturbing is the impact this is having on women and girls of all ages. It's a painful irony that a multi-billion pound industry, purporting to mirror real life is essentially erasing women's stories from our screens.

And when older women are shown, TV and film casting often favours women who have bodies that are the shapes and sizes of younger women. Research from the US has linked this to eating disorders and negative body image in older women.

The same goes for women behind the camera. In the US, for example, women comprised just 8% of directors working on the top 250 US domestic grossing films in 2018.

Victoria Mapplebeck, professor in digital arts at Royal Holloway University of London has recently written about how she was unable to continue working as a film director after she had a child. She writes:

Unable to get funding, she took matters into her own hands and used to iPhone to make a new documentary. She won a Bafta for her smartphone short Missed Call.

In my work as an actor and writer, I've witnessed how the industry treats older women - if I send a script to a producer, for example, I'm inclined to include only my initials.

I have recently written and performed a spoken word piece to raise awareness of this issue, in support of the Acting your Age campaign, which calls for equal career trajectory for men and women in the entertainment industry.

My piece talks to the Silver Foxes - the men of the industry: "bossing stage and screen, being seen while his female counterparts gather dust...tentatively wondering if surgery is an option".

The campaign, started by actor and campaigner, Nicky Clarke, has been supported by the likes of David Tennant, Julie Graham, John Simm, Amanda Abbingdon, Ray Winstone and Juliet Stevenson.

Hugh Quarshie, a Ghanaian-born British actor, who has also backed the campaign, likened the invisibility of older women on screen to past black representations in TV and film. He says serious pressure must be put on the producers and broadcasters to provoke rapid change and deal with the problem of invisibility.

As part of her research for the campaign, Clarke found that only 9% of UK viewers can recognise more than 15 women over the age of 45 on our screens compared to 48% of viewers who can easily identify more than 15 men of that age on screen.

While 50/50 gender split in roles and more older women cast in TV and film will help matters, what we really need is more women behind the camera and in the writing studios telling stories that women of all ages want to hear.

In the age of multiple streaming services, this should be possible. Particularly so given that women watch and stream more TV shows than men. Women's viewership needs to be valued, indeed, as the end of my poem states: "Beware, Beware, Beware...she ain't going nowhere".