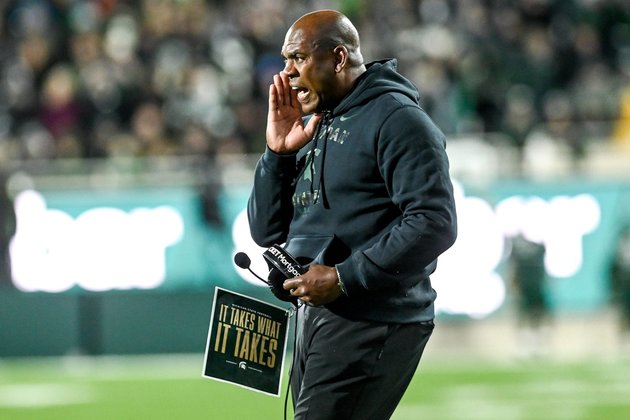 The deal, which was reported by multiple media outlets last week, was confirmed by the school on Wednesday.

In the interim, the Spartans went to Ohio State and were demolished 56-7, dropping Michigan State's record to 9-2 on the season. On the plus side, the Spartans did beat rival Michigan 37-33 earlier last month.

The extension puts Tucker under contract through Jan. 15, 2032.

Tucker tweeted after the school's announcement, "Every day I wake up feeling humbled to be the Head Football Coach at Michigan State. It is my privilege to work alongside our student athletes, coaches and staff who embody our culture of hard work, discipline, and excellence -- on and off the field. ...

"I am honored to be a part of the Spartan process today, and for years to come."

University president Samuel L. Stanley Jr. wrote in a statement, "Mel Tucker has been an outstanding addition to our Spartan Athletic program. In less than two years, his leadership has already resulted in a program competing for top honors, and I'm impressed by his intensity and drive. Spartan fans around the country are enjoying the success of this year's football program and we look forward to many more successful seasons, competing at the highest levels under Coach Tucker."

After spending one season as the head coach at Colorado, producing a 5-7 record in 2019, Tucker came to Michigan State and led the Spartans to a 2-5 mark in 2020.

The 49-year-old Ohio native previously was an assistant coach for Miami (Ohio), LSU, Ohio State, Alabama and Georgia in the college ranks as well as the Cleveland Browns, Jacksonville Jaguars and Chicago Bears in the NFL.

MUNICH, Germany: German authorities announced this week that a World War II bomb exploded at a construction site next to ...

MEXICO CITY, Mexico: A Mexican gang crashed vehicles into a Mexican jail this week, in a successful bid to free ...

Robot company will pay $200,000 for human faces for use on robots

PERM KRAI, Russia: Tech company Promobot is planning the launch of a new line of human-looking robots, but first they ...

US saw only 210,000 hired in November, falls short of expectations

WASHINGTON D.C.: In a reversal of the predictions of expected job growth issued by economists, U.S. employers hired only 210,000 ...

CHESAPEAKE, Virginia: Discount retail chain Dollar Tree said it will raise its prices from $1 to $1.25 for most of ...

MCLEAN, Virginia: Capital One bank has announced plans to cancel overdraft fees early next year, and becoming the largest bank ...