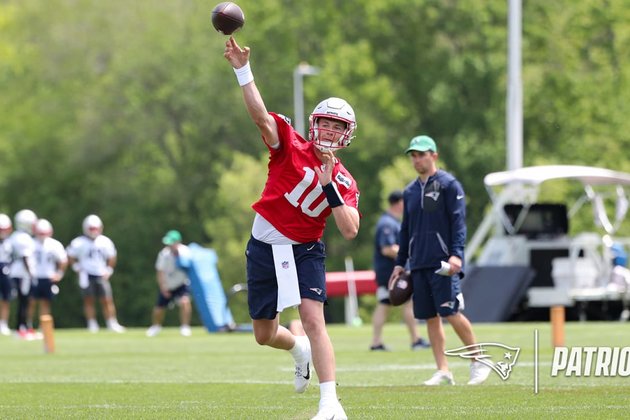 With the first open practice completed, Mac Jones and the Patriots begin their long on-field journey toward the 2022 NFL season.Mike Dussault

The Patriots held their first open practice availability of the offseason on Monday and for the first time since 2019, there's a clear-cut returning starter under center in Mac Jones. Jones made a solid impression, connecting on a couple notable throws to Kendrick Bourne while also looking like he had put his offseason time to good use.

"I think right now it's all about learning and the first day you come out and you set a baseline, then fix the things that you want to fix," said Jones following the two-hour session adding of the new look offensive coaching staff, "They all have great knowledge of our offense, and we're all on the same page. That's the important part to me."

With constant chatter about how the Patriots would go about replacing offensive coordinator Josh McDaniels, Mac had Joe Judge with him through most of Monday's session, while Bill Belichick made plenty of appearances on that side of the ball as well.

"[Joe's] seen a lot of football, he's been around football for a long time whether as the head coach, special teams, playing the position himself, so he has knowledge that is very beneficial to me as a quarterback and obviously I'm gonna learn with him," said Jones. "That's the goal is to kind of teach each other and move along and take what he knows and then take the experiences that I have and combine them and work together as a great team."

As is the case with most second-year players, Jones fully immersed himself in both Moses Cabrera's strength program and sport nutritionist Ted Harper's eating plan. The results were not lost on receiver Kendrick Bourne, who said that hard work will pay off late in the NFL season.

"Mac, he's in the best shape of his life," said Bourne. "He looks really good, his stomach has gone and he's definitely a pro's pro now. You know, you're a rookie, you just don't know until you go through it for years. So he's definitely a lot more in shape than he ever was. He's just dominating the conditioning and it's just dope to see. He'll just be able to endure more in the game, and go through more."

It's Mac's first time as a returning starter since he was in high school, after starting just one season at Alabama then playing well enough for the Patriots to select him in the first round. After a strong training camp in 2021, Mac seized the starting job and never looked back. Now, in Year Two, he's looking to make a jump with the rest of the offense.

"Just as a rookie, you come in, you're kind of thrown in and all the plates are hot," said Jones. "So you kind of just try and find your feet, but this past offseason and right now, we've just built a great relationship with the offensive line, the receivers, hanging out together, just doing things together off the field, because at the end of the day, we're all friends, we work together, we want to play for one another, and that's important to me,. That's why football is the best team sport."

With not only his full array of receivers, tight ends and running backs returning, the team also added to the attack in numerous ways this spring, whether it was trading for DeVante Parker or drafting the trio of Tyquan Thornton, Pierre Strong and Kevin Harris. So far, Jones likes how it's all coming together.

"We always hang out and have fun and talk the talk and all that and it just builds builds for Sundays," said Jones. "I'm really happy with the group we have. I got a chance to work with all of them during the offseason at various locations and here, so I've been very pleased with everybody. [We] have a tight group once again."