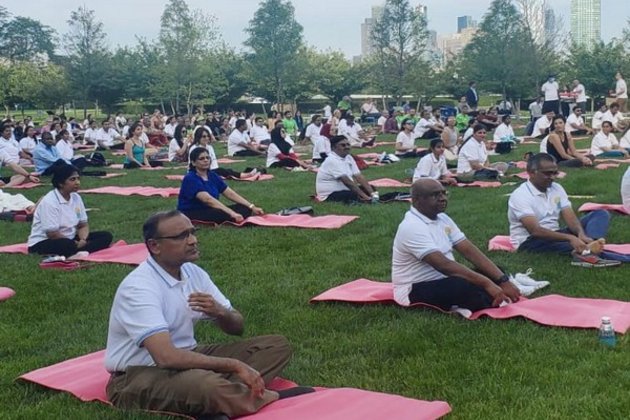 New York [US], June 21 (ANI): On the occasion of 8th International Yoga Day, India's Permanent Representative to the United Nations, Ambassador TS Tirumurti on Tuesday hosted the event at the North lawns under the UN Building.

Taking to Twitter, the Indian Ambassador said that this is the first-in-person event after two years.

Meanwhile, in India, Prime Minister Narendra Modi performed yoga at the main event of the eighth edition of the International Day of Yoga in the heritage city of Mysuru in Karnataka.

More than 15,000 people participated in the Yoga celebrations along with the Prime Minister at the Mysore Palace grounds.

Karnataka Governor Thaawarchand Gehlot, Karnataka Chief Minister Basavaraj Bommai, Union Minister for Ayush Sarbananda Sonowal, officials of the Ministry of Ayush and the Government of Karnataka, and other dignitaries performed yoga at the event.

This year the theme for the celebration is "Yoga for humanity". The theme has been selected after much deliberation/consultation and it appropriately portrays, how during the peak of the COVID-19 pandemic, yoga served the humanity in alleviating the suffering, and in the emerging post-COVID geo-political scenario too, it will bring people together through compassion, kindness, foster a sense of unity and build resilience among people world over.

Prime Minister's Yoga program at Mysuru is also part of the novel program 'Guardian Yoga Ring' which is a collaborative exercise between 79 countries and United Nations organizations along with Indian Missions abroad to illustrate Yoga's unifying power that surpasses National boundaries.