Mailbag: Who Is the Favorite to Win Left Guard Competition 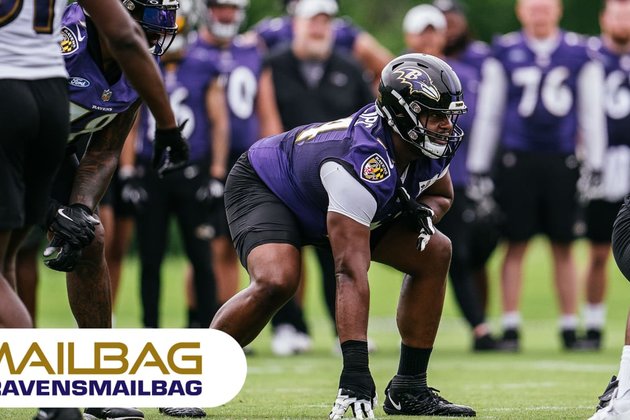 Brown: That's a great question and there isn't a clear leader at left guard heading into training camp. If I had to name a favorite now, I'd go with Tyre Phillips. He's athletic and has played well when healthy at both guard and tackle during his two years with the team. Ben Cleveland may also win the job, if he uses his size and strength to become an even more consistent blocker. Ben Powers can't be overlooked either, after making 19 starts during his three seasons in Baltimore. Patrick Mekari is another candidate, but he can play all five offensive line positions, making him extremely valuable as a versatile backup if the Ravens use him in that role. With so many possibilities, left guard will be the most interesting offensive line battle of the summer.

Downing: First of all, let's not assume J.K. Dobbins and Gus Edwards will be out to open the season. Head Coach John Harbaugh said last week that he's hopeful both of them will be back for Week 1. But if they are sidelined early in the year, then I would expect the Ravens to use a rotation in the backfield, rather than have one bell cow. Mike Davis is the most experienced of the group, but rookie Tyler Badie was impressive in offseason practices, especially catching the ball out of the backfield. Justice Hill also had a strong spring after recovering from a torn Achilles. Davis is a veteran running back, but the young players have shown they have talent. The Ravens like to rotate their running backs, rather than have one back do the heavy lifting in a dominant running offense. I expect that to be the case throughout the season, including if Dobbins and Edwards are out early in the season.

Brown: There's no doubt the defense will look somewhat different under Mike Macdonald. In addition to any scheme adjustments, the Ravens have also made big changes because personnel, particularly in the secondary. The additions of Marcus Williams and Kyle Hamilton give the Ravens two additional athletic safeties who can cover ground and help Macdonald show a variety of looks. As Michigan's defensive coordinator, Macdonald excelled at putting his best playmakers in positions to create havoc. He did it with Aidan Hutchinson, Dax Hill and David Ojabo, and with the Ravens, Macdonald will try to do the same thing with players like Williams, Hamilton, Odafe Oweh, Marcus Peters, Marlon Humphrey, Kyle Fuller and Ojabo once he gets healthy. The Ravens finished last in the NFL in pass defense last year, and they forced just 15 takeaways, their fewest since 2015. Macdonald wants this year's defense to be versatile and aggressive, the kind of defense that can force quarterbacks to make mistakes that give the ball back to Baltimore's offense.

Downing: The Ravens have a long history of undrafted rookies making the 53-man roster, so this is a popular question every year. I do think this will be a more difficult season for an undrafted player to make the active roster considering that the Ravens had so many draft picks (11). But the Ravens have proven that they'll keep the best 53 players on the team, and they'll use training camp and the preseason to determine who that is.

The position that I think could produce an undrafted rookie on the 53-man squad is wide receiver. The Ravens traded Marquise Brown, released Miles Boykin and Sammy Watkins left in free agency. They also didn't draft a receiver. That leaves Baltimore with a young group of pass catchers, and it creates an opportunity for a talented crop of undrafted wideouts looking for a spot. The four receivers who look like locks to make the 53-man roster are Rashod Bateman, Devin Duvernay, Tylan Wallace and James Proche. That leaves one or two roster spots up for grabs between the rookies and other young receivers fighting for their role. The Ravens have six undrafted receivers on the team right now: Slade Bolden, Shemar Bridges, Trevon Clark, Makai Polk, Raleigh Webb and Devon Williams. The players in that group who stood out the most to offseason practices were Alabama's Slade Bolen and Fort Valley State's Shemar Bridges. They are two very different players. Bolden is 5-foot-11, 189 pounds, while Bridges is 6-4, 207 pounds. Both of them flashed at times and they could earn a roster spot with a strong summer camp.

French urged to conserve energy use to prepare for winter

PARIS, France: Amidst shortages and soaring prices caused by Russia's invasion of Ukraine and subsequent supply cuts, the heads of ...

MAGWAY, Myanmar - At least eight resistance fighters were killed on Wednesday when junta troops intercepted a truck they were ...